Today is the first day of the MicroMillions series which are, as PokerStars recently announced, back on this site. These popular low stakes tournaments will be available in the lobbies starting today and all the way to the 29th of July. Today you can take your place in four events: 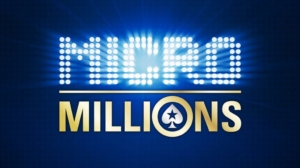 MicroMillions are back on PokerStars

The 14th MicroMillions series will not only bring great MTT tournaments available for everyone’s bankroll, but there will be some following promotions and prizes that you can win.

If you play at least 5 events of these series you will get a ticket and automatically be entered to an All-in Shootout tournament which will take place on July 31st. Good news is that you don’t even need to be online and logged in to your Stars account to participate. First 2 places will get a $30.000 Platinum Passes – $25.000  seat in January’s PokerStars Players No Limit Hold’em Championship (PSPC) and $5.000 hotel and traveling expenses.

During the series, PokerStars will be giving away $50.000 in free tickets for some tournaments of this event.
You just need to play their events.

There will be 0.50$ Spin ‘n’ Goes on which you can win a $22 ticket for the main event. But that’s not all! The highest possible prize pool on these Spin ‘ n’ Goes will be $6.000. Here you can see possible prizes and  how often they will come up:

MicroMilions for the Spanish, French and Portuguese players:

Whole separated MicroMillions event will take a place at Pokerstars’s shared pool between Spain, France, and Portugal, where players from other countries can also take apart! You can find tournaments from €0.50 to €50 and the whole event has a prize pool of $2.000.000 guaranteed. The Main Event will be with €50 buy-in and is scheduled for July 29th.

SPANISH AND FRENCH PLAYERS POOL IS MERGED! PORTUGAL IS IN! WAITING FOR ITAL...
Scroll to top