PokerStars is now the official and exclusive poker partner of the UFC. The heavyweight of online poker has teamed up with UFC. UFC is the largest mix martial arts promoter in the world. Both of these industry leaders claim: Expect action!

Look out for fantastic promotions and VIP experiences, fight for huge prizes in our new UFC Spin & Go’s, and much more!

Grapple for huge cash prizes in our new UFC-themed Spin & Go’s – where poker and the world’s most exciting combat sport collide!

Go and challenge in the Spin & Go lobby now! Also, visit the PokerStars Store for many great new products!

Register with us to PokerStars, grab the Welcome Bonus and start the FIGHT!

Just play 20 Spin & Go’s and you could win a share of a juicy daily prize pool. This Leader Board is like no other because you don’t need to grind! Once you’ve opted in, only the first 20 Spin & Go’s each day count, so anyone could win. Where will the spinner land?

The Spin & Go 20 Leader Boards run for three weeks – from April 3 to April 23. To make it even more exciting, the way you win points changes halfway through.

Here’s how it works: 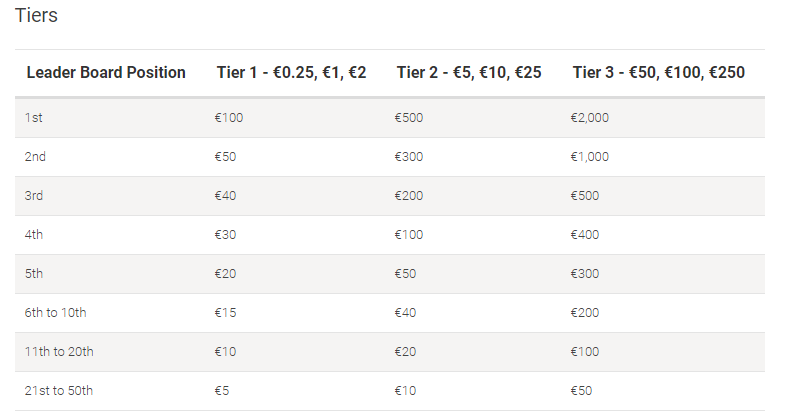 Round One: Big Multipliers = Big Points

Round One starts at 12:00 CEST on April 3 and runs until 11:59 CEST on April 12. Hope to hit those big multipliers for the best chance to tally up a huge points total. Better yet, win the Spin & Go and you’ll get double points.

Please note: Spin & Go Max games do not qualify in Round One.

Do you like sports betting? partypoker sports has a great promotion for you – Weekend Bet & Get. Check out how it works and which prizes you can win every weekend.

With this promotion, you can win every week! The promo period lasts until the 12th of May, so hurry up!

How Weekend Bet & Get works?

Once you met the wagering requirements, you go to Click Card. The prizes are ranging from a deposit bonus, free spins or even a $/£/€100 free bet.

Prizes will be made available as soon as your qualifying bets have been settled – simply go to our promo page and click the relevant card to reveal your prize!

Join partypoker sports today with us and check out which Welcome Offer is waiting for you!

Do you like sports betting? On Unibet Tennis Jackpot Raffles and its worth €10,000.

Bet and Watch on every point live from the Miami Open tournament this spring. You can get even more from the action by taking part in two €10,000 Prize Draws.

Some of the world’s top players will be serving up great tennis in March and April.  Unibet will have thousands of markets for you to bet on. Don’t miss the chance to follow every storyline as it develops and win a big cash prize into the deal.

If you still do not have an account with Unibet register with us now and grab your Welcome Package!

Just a few minutes is all it takes to win a package to PokerStars and Monte-Carlo©Casino EPT. You can do it through a special edition of Spin & GO tournaments. Hurry up! Promo period is on until the 14th of April.

Play a €35 Spin & Go and if your prize spinner hits the top tier you’ll be playing for the following:

Please note: Prize winners will be responsible for making and paying for all travel arrangements.

If you still don’t have an account at PokerStars, register with us and grab a Welcome Bonus! More about it you can find in our offer review.

Great news for all casino lovers! There is a new promotion by MansionCasino – Table Thursdays!

Win your Cashback every week!

Your Card gameplay is about to get a whole lot better! It’s because MansionCasino will have your back with an up to $/£/€100 cashback safety net! Every Thursday, grab 20% cashback up to $/£/€100 on any of our thrilling Cards games!

How does Table Thursdays promotion work?

You simply need to deposit $/£/€20+ using a promo code THURSDAY to be eligible. The promo period is 00:01 – 23:59 (GMT) every Thursday. That means that you have a chance to win every week, not just once! Remember: Only House takings from real money funds on card games only during the promotion period will count towards the cashback credit. This promotion is not valid on Live games!

Register with us to MansionCasino.com and join this great promotion! Also, there is a Welcome Bonus waiting for you!

partypoker introduced Short Deck. This is a new format – a version of popular 6+ Hold’em. It is very popular these days, so check out how it will work on partypoker.

Short Deck is an increasingly popular variation of poker which uses just 36 cards. The game plays similarly to Texas Hold’em, however, the reduced deck opens up a whole new level of strategy!

Otherwise known as “6+” or “Six Plus Hold’em”, Short Deck poker has become a particular favorite of the very highest rollers in poker.

However, partypoker offers you the chance to experience the thrills of Short Deck without having to step up to the nosebleed stakes. With buy-ins from just $2, there’s plenty of 36-card action for players of all bankrolls!

The key differences from Texas Hold’em are:

Use Short Deck lobby to  immediately seat at a table! After selecting a stake, our quick seat function allows you to be playing in seconds. There’s also the option of opening up multiple tables at once.  Simply select how many tables you’d like open and click “play now”.

Short Deck is similar to Texas Hold’em. Players get two hole cards, and there are four rounds of betting (pre-flop, flop, turn and river).  You create the best combination on 5 cards from 7 cards total.

However, the 36-card deck enables players to hit “good hands” more frequently compared to Hold’em. Short Deck therefore delivers high-action games, where you’ll often find yourself in hands against most of the table, with pots playing deeper and longer.

Unlike other cash game formats, Short Deck permits players to remove chips from the table once they build up a big enough stack. Players can then continue to play at the same table. partypoker will be the only operator to make a removal of funds feature available, exclusively for our Short Deck cash games.

When the feature is enabled, players can select the number of antes they wish to reduce their stack to from the table via the funds removal tab

Here, players will clearly see the minimum table balance that can be held by a player who wishes to remove money from the table.

It is important to note that the reduction only takes place after the active hand is completed. If a player wins more, their balance is still reduced to 300x ante. If the player loses a hand, leaving them with less than 300x ante, their stack cannot be reduced further.

Join partypoker now for this great action! Do it with us, and there is Welcome Package waiting for you!