partypoker has released the POWERFEST schedule – the upcoming online festival! Find the dates for your favorite tournaments and joint this $28M series!

The 10th edition of the partypoker’s flagship tournament series will run from July 28 to August 11. It will bring ver $28M in guaranteed prize money spread across 275 separate tournaments.

The POWERFEST schedule features an array of game types and structures in a range of buy-ins to suit all bankrolls.  There will be new and returning formats such as ‘Battle PKOs’, ‘6-4 Mix-Max’, ‘PLO’, ‘PLO8’ and ‘Big Antes’, while ‘Phased events’ and ‘POWERFEST $320s’ also make a return for the 10th edition.

Omaha players are well catered for, with over $1.9M in guaranteed prize money to be won. This popular 4-card game will also have it’s own championship events!

A total of eight Championship Events will bring the festival to a close on August 11, while players can enjoy a taste of the action for a fraction of the price through special edition SPINS games, starting July 14. 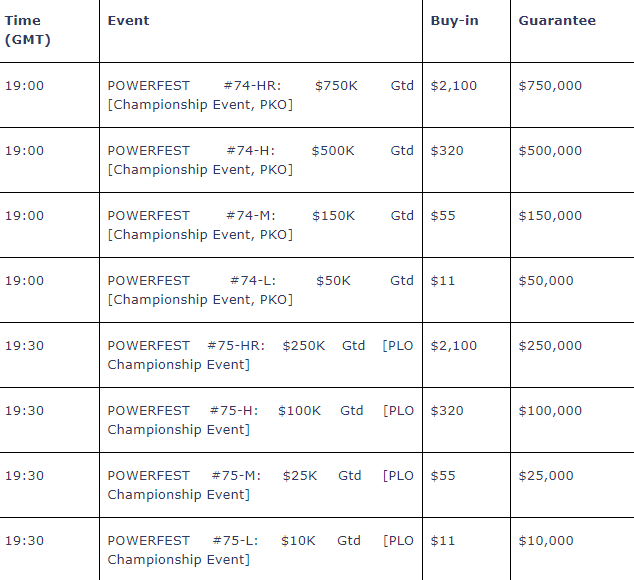 To celebrate the landmark 10th edition, a $10k Freeroll will award a mixture of series seats.  Also, the “POWERFEST Satellite Week”  starts on July 21st and they make this schedule even more attractive.  There will be daily freerolls each giving away $1,000 worth of satellite tickets in the run-up to the campaign.

Team partypoker’s Patrick Leonard said: “I am really excited that POWERFEST is coming back around again. The series is always a standout highlight on the online poker calendar and one I make space in my diary for.

“The 10th edition promises to be extra special too, with a host of promotions lined up to give players the chance to join the action for less, including a $10k freeroll!”

If you still don’t have the account at partypoker, create it with us and grab up to $30 in FREE SPINS tickets!