Team Online’s Patrick “Egption” Tardif managed to navigate himself to two POWERFEST final tables on Day 6 of POWERFEST X, narrowly missing out on a brace of titles.

Thirteen champions were crowned on Day 6 with another $390,852 distributed among those 13 events, taking the total prize money awarded to $9,846,026 as we approach the halfway stage of the $28 million guaranteed series.

POWERFEST X: The Story So Far

With bounties included, none of the eight finalists walked away with less than $2,100, a great return on their initial investment.

“Tommm” was the first casualty of the final table, their eighth-place finish banking them $907 plus $1,288 worth of bounty payments. They were joined on the rail first by “DaleJordan1”who won a POWERFEST event on Day 5, “Valhalla”, “NicoMaserati57” and then by Tardiff whose fourth-place exit saw him net $3,333 plus $1,649 from the bounty prize pool.

Tardif then reached the final table of the POWERFEST #30-H: $10K Gtd PLO8 6-Max Fastevent and was joined by teammate Jaime “jaimestaples” Staples in this action-inducing tournament.

“SprCpn” crashed out in sixth-place for $626 before Tardiff ran out of steam in fifth-place for a $943 return on his $109 buy-in. Tardiff was then joined in the role of spectator by “Floydey”who collected $1,283 before Staples’ crashed and burned in third-place for a $1,812 addition to his partypoker bankroll.

Heads-up ended in a chop with “FONBET_RULIT” claiming second-place and $3,181 and “reQuireJunKgent” being crowned the tournament’s champion, an accolade that came with a $3,189 prize after the aforementioned heads-up deal.

The $109 POWERFEST #29-H: $25K Gtd Deep Turbo only took four hours and 38 minutes to complete thanks to its turbo blind structure, meaning everyone’s hourly rate was vastly improved, especially that of “NostatsNograts” who won the $5,195 top prize who won approximately $1,150 per hour of the tournament.

The top six finishers walked away with at least $1,070 with “Lebron2333” collecting the first four-figure prize. They were joined on the sidelines by “WorshipMe_7”, “Hex Veldluis” and “RukitaBukzuski”.

Heads-up saw “Bulbasaur165” and “NostatsNograts” lock horns heads-up and it was the Pokemon character who busted. Bulbasaur165 netted $3,771 for their runner-up finish with the champion receiving $5,195 and plenty of congrats despite not having any HUD stats! 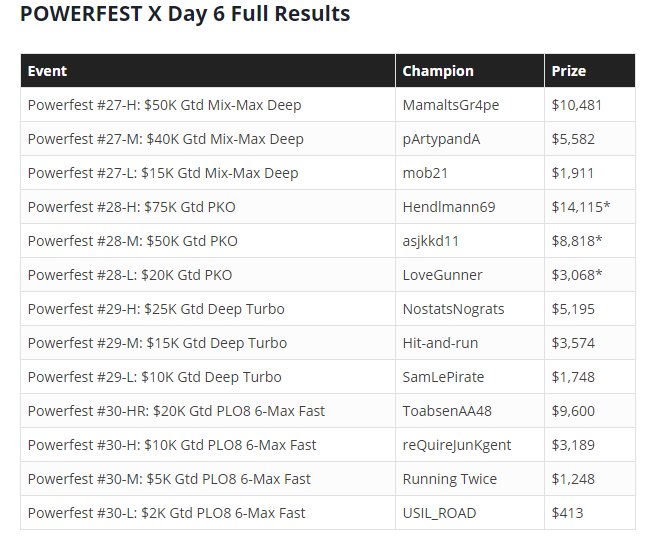 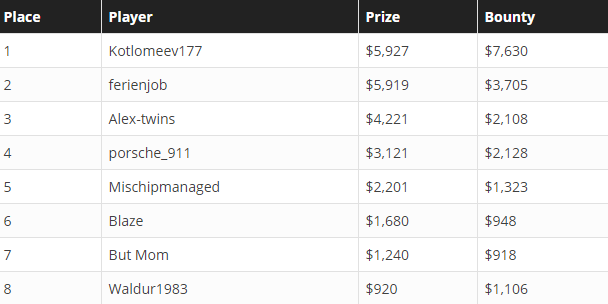 Team Online’s Kevin “KevinMartin” Martin scraped into the money places. His 66th place finish winning him $230. This prize money increased to $841 by the time “player123.” busted in eighth-place.  He secured a four-figure prize for the remaining seven hopefuls.

The heads-up duo struck a deal for the remaining prize pool. So, the second-placed “Alejandro” collected $8,152 with the champion, “KingRalf” banking $8,207 for their $109 investments. 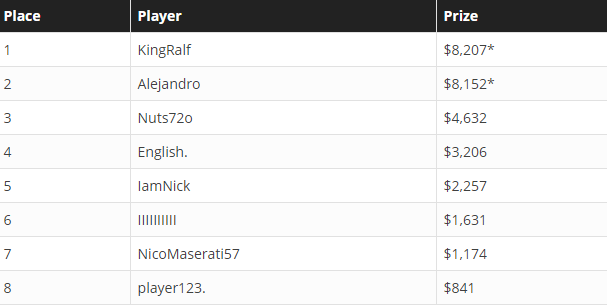 Team Online’s Jaime “jaimestaples” Staples put togther a deep run in the POWERFEST #34-H: $25K Gtd Mix-Max Deep Turbo event. But, he could only manage a 14th place finish for $287.

Each of the six finalists won at least $1,000, the sum given to sixth-place finisher “Plush0”.

That larger prize went to “lamant.blanc who saw $5,217 deposited into their partypoker account. Leaving crumbs23456 to settle for the $4,532 consolation prize. 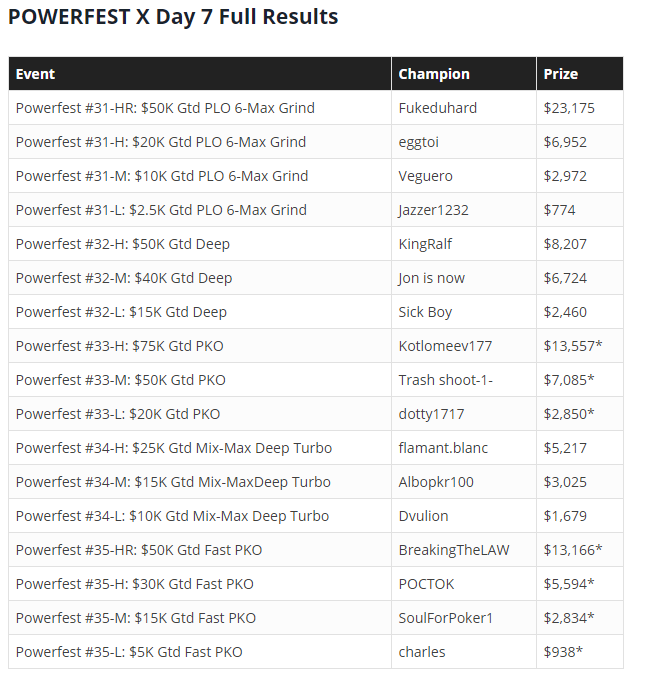 CASH SPLASH – A $500K Promotion by partypoker
Scroll to top